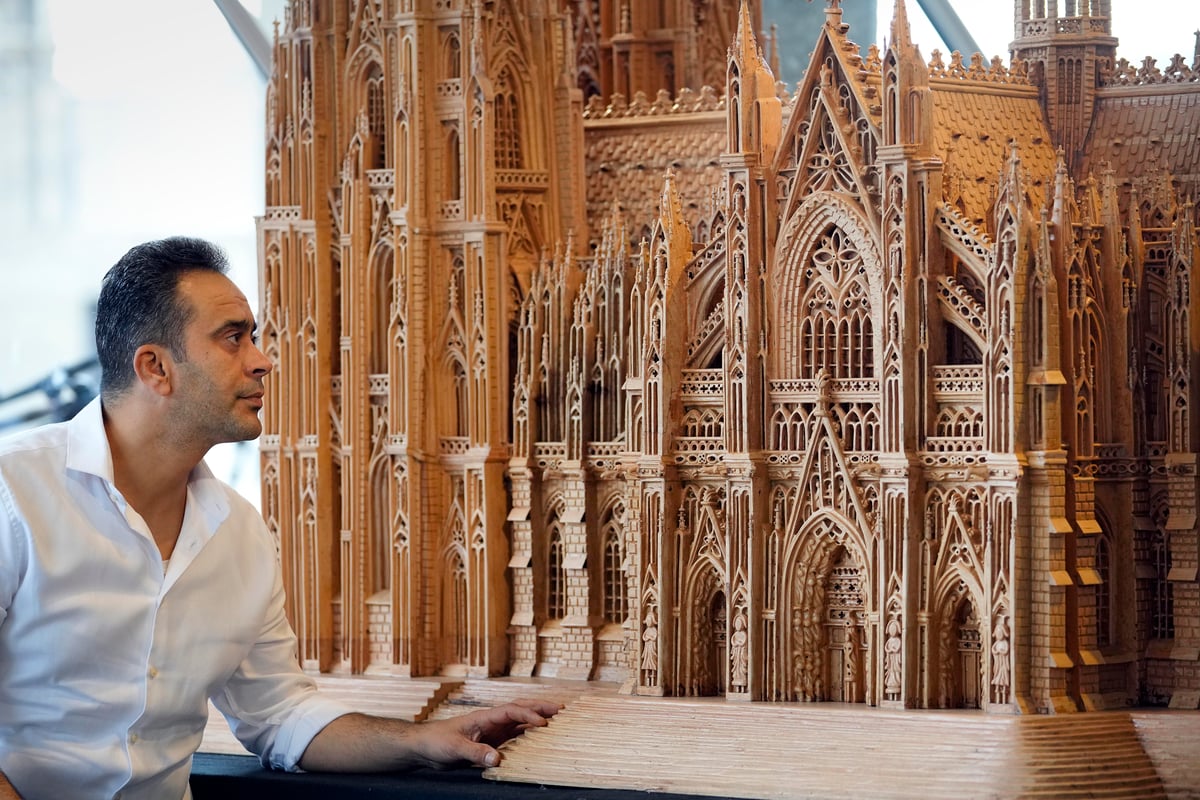 When Syrian refugee Fadel Alkhudr arrived in Germany in 2015, the first thing he saw when he stepped out of the train in Cologne was the city’s majestic cathedral.

Mr Alkhudr, 42, became so fascinated by the famous Gothic landmark on the Rhine river with its twin spires and elaborate ornaments that they spent hours looking at it.

He took photos of it, drew sketches, and eventually started carving a wooden replica.

For more than two-and-a-half years – or around 5,000 hours, as he says – Mr Alkhudr worked on creating a two-meter (6.5ft) tall copy of the structure in a small basement-turned-workshop in Cologne’s Kalk neighborhood.

Mr Alkhudr, who is a Muslim, said he developed such a close connection to the Catholic Cathedral that at some point it felt like the building became a part of him “like it’s a dear friend to me”.

The Syrian, who learned carving from his father at the age of 13, first fled to Turkey and then to the western German city of Cologne after his family’s wood-carving business in Aleppo was destroyed in the war in Syria.

He said he is often asked if it didn’t feel strange for a Muslim to dedicate himself to Germany’s now famous Christian house of worship.

Not at all, he answers, because growing up in Aleppo before the civil war, he had both Muslim and Christian friends, and customers from different religions who came to buy wooden art at the family store.

“When we were in Aleppo we used to have issues no issues between a mosque and a church,” the father of five recounts.

“Our neighbors were Christian and we are Muslims, we used to invite each other into our homes and there were no problems.”

Mr Alkhudr is one of more than one million migrants who came to Germany from Syria, Iraq and Afghanistan in 2015-16, escaping war, destruction and poverty in their home countries.

He first worked odd jobs to make a living, brought his family over in 2017, and, since 2019, focused on creating the cathedral model.

He hopes that in the future they can also make a living in Germany as an art carver.

Mr Alkhudr used hard beech wood and 50-year-old tools from back home in Syria that his father had passed on to him.

The end result was taller than himself, measuring two meters in height and length, and 1.40 meters in width.

It is a UNESCO World Heritage Site and hosts the Shrine of the Three Kings, believed to contain the bones of the Three Wise Men.

The cathedral is one of Germany’s top tourist attractions and one of the oldest and most important pilgrimage sites of northern Europe.

Mr Alkhudr’s delicately chiselled work is currently on show at the cathedral’s Domforum visitor center just across from the original.

The Syrian hopes that they can present his woodwork in other cities, too, and thus spread what he inside as the cathedral’s unifying message.

“For me, the cathedral is a home for all people,” he said.