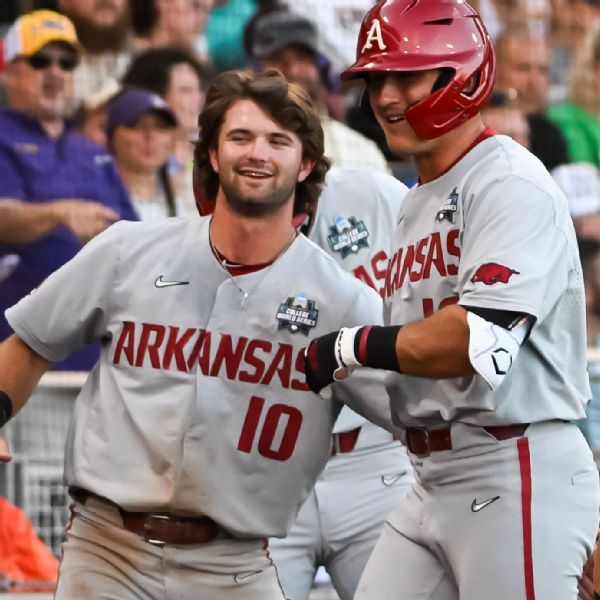 OMAHA, Neb. – Will McEntire limited Auburn to three hits and a run in seven innings, Peyton Stovall became the first player in 13 years with five hits in a College World Series game and Arkansas eliminated Auburn with an 11-1 victory Tuesday night.

The Razorbacks (45-20) moved to the Bracket 2 final against Mississippi. They would have to beat the Rebels on Wednesday night and again Thursday to go to the best-of-three CWS finals this weekend.

Auburn (43-22) finished with 18 more wins than a year ago and made it to Omaha after being picked last in the Southeastern Conference West.

McEntire gave the Hogs the quality start they needed after they used seven pitchers in a 13-5 loss to Ole Miss on Monday.

McEntire (2-2) retired the first 11 batters he faced before Sonny DiChiara singled to the center with two outs in the fourth. The 6-foot-4, 225-pound right-hander struck out a career-high nine, walked one and didn’t give up a run until Bobby Pierce homered leading off the seventh.

“I’d say that’s No. 1,” McEntire said when asked where the performance ranked in his career.

Last season, McEntire sat out as a redshirt and already had joined his summer team in Minnesota when the Hogs played in super regionals. He watched those games from his motel room in Duluth.

This season, McEntire continued biding his time and didn’t make the travel roster until April. He made some midweek starts and worked out of the bullpen before earning a more significant role in the last month.

McEntire started the super regional-clinching win at North Carolina, throwing 5⅔ scoreless innings. He was even better on a bigger stage Tuesday.

“They didn’t get many opportunities early, and when they got the opportunity they shined,” catcher Michael Turner said. “He’s taken advantage of every opportunity he gets.”

Relying on a four-pitch mix of a low-90s fastball, cutter, curve and changeup, McEntire struck out six in a row at one point.

“Wherever Turner put his glove, that’s where the ball was going,” Auburn’s Brody Moore said. “I thought he had a really good command, and didn’t make as many mistakes as a starting pitcher usually does.”

McEntire’s confidence grew as his team got out to an early lead and built on it.

“I think the two losses we had, we scored one run in each game,” Auburn coach Butch Thompson said. “That was going to be a challenge. Down the stretch, we had to tip our hat to too many starting pitchers. Conversely, I think it’s the 10-plus runs that we gave up with two outs.”

Braydon Webb doubled into the left-center gap on Barnett’s first pitch of the game and Stovall followed with an RBI single to begin his 5-for-6 night. The previous player with five hits in a CWS game was North Carolina’s Dustin Ackley in 2009.

Stovall, one of the nation’s top recruits last year, struggled for much of his freshman season but is batting .563 (9 of 16) through three games in Omaha and has a CWS-leading 10 RBIs.

“He felt a lot of pressure, with social media and everything else – preseason this, preseason that,” Arkansas coach Dave Van Horn said. “It’s hard to put that on kids who haven’t seen a college arm yet. He’s been really good the last month.”

Van Horn flipped Brady Slavens and Stovall in the batting order for the game, moving Stovall from No. 8 to No. 2.

“The game kind of tells you what to do every now and then,” he said. “I feel like Brady isn’t swinging the bat like he was even last weekend. Peyton has been swinging it great.”

The Razorbacks added three runs in the third inning and four more in the fourth, highlighted by Chris Lanzilli’s 400-plus-foot homer down the left-field line.

Lanzilli also homered in a 17-2 win over Stanford on Saturday and has 10 for the season after hitting 42 in four years at Wake Forest.

For the first time in the 75-year history of the CWS, each of the first 10 games was decided by four or more runs.