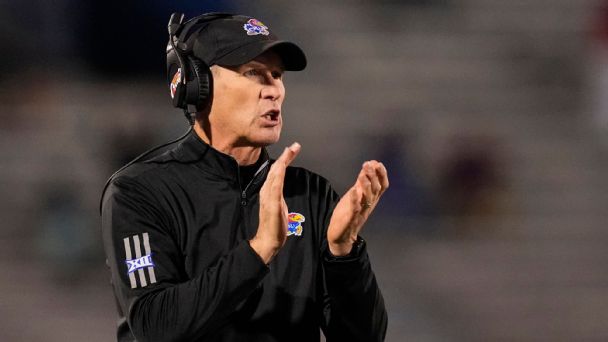 LAWRENCE, Kansas – It’s called the “Perfect Discipline,” and it’s one of the most stressful things I’ve witnessed at a football practice. It’s part calisthenics, part memory game, part Simon Says, and every Kansas practice this spring ended with it. A coach would communicate a specific set of commands – always slightly different – to a player of the staff’s choosing, and the player would have to communicate it to his teammates. Everyone would have to do a certain number of them correctly within a certain time, or the entire team had to do extra conditioning.

It’s a drill that encapsulates everything about Lance Leipold and his coaching style. The six-time Division III national champion maintained a top-notch culture at Wisconsin-Whitewater and built one from scratch at Buffalo. Now, he’s trying to do the same in one of the toughest jobs in college football. I visited Lawrence this past spring to discuss the task at hand – bringing Kansas football back to respectability after years in the wilderness – and to uncover the secret sauce of Leipold’s program-building approach.

A former UWW quarterback who spent time as an assistant at Wisconsin, Nebraska and Nebraska-Omaha, Leipold took over at his alma mater in 2007, thinking he had found a reasonable and exciting end point for his coaching career.

“I’m like, you know what? That’s a good Division III life,” he said. “I’ll keep plugging along, and maybe I’ll go into administration somewhere along the way.”

Winning changed those plans. His Warhawks won four national titles in five years, and after a brief step backwards in 2012, Leipold hired Andy Kotelnicki as an offensive coordinator, and UWW won 30 straight games and two more national titles. The time seemed right for a new challenge. He landed the Buffalo head coaching job in 2015 and took Kotelnicki, defensive coordinator Brian Borland and other assistants with him.

They found they had a few lessons to learn.

“The context matters because Whitewater, I mean, [Leipold] took them to a new level of consistency, but they had been good, “Kotelnicki said.” It’s a good job. I guess you would call them a blue blood of Division III football. When you are at a program like that, there is already a culture, an expectation. Kids go there because they want to win, and you get competitors there.

“At Buffalo, there were Division I athletes and Division I work ethic, but there wasn’t a culture. There wasn’t any kind of tradition. In the first 18 months, candidly, I think we made a lot of mistakes.”

“We get done with that 2-10 year and we start talking about culture more and researching it more,” Kotelnicki said. “We became very intentional that spring about what culture is – how we install it and, more specifically, how we define it.”

How do do you define it?