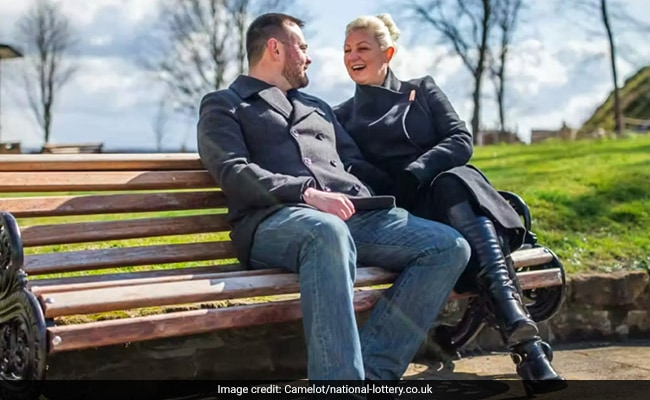 The total amount that the couple will win amounts to 3.6 million pounds over 3 years

A couple living in the UK has won the ‘Set For Life’ scheme under the National Lottery. While now the lotteries give you a fat lump sum of money, this win will instead give the couple 10,000 pounds a month for the next 30 years. Laura Hall and Kirk Stevens managed to match all five lottery numbers including the special ‘Life Ball’ to win the top prize on March 1, 2021.

The couple has been playing this lottery since 2019 and bought their winning ticket online. Initially the pair were completely clueless about their win and in fact continued to play the lottery thinking that they had only won 5 pounds. The organizers of the lottery, Camelot had to reach out to the couple and only after Laura Hall logged into her Camelot account did she see that she had won the lottery.

According to The Daily Mail a clip has been doing the rounds on social media where one can see Ms Hall talking to an agent and confirming whether she has indeed won, and once it is affirmed goes on to say “I think I’m going to be sick”. Since that moment last year the two of them have bought a house with Kirk Stevens paying off his master’s degree and Laura Hall quitting her job.

According to Wales Online the couple has a keen interest in “ghost hunting”. They have used some of the money to visit The National Justice Museum in Nottingham to conduct investigations into the paranormal. The publication quotes Laura Hall as saying “Kirk and I are participating in lots more paranormal activities and I’m editing the videos we take which I absolutely love doing… I’m getting better and better at editing and the other month one of our videos was voted by a top ghost hunting YouTuber, one of his videos of the week. It’s as if I’m getting paid to video edit, for the next 30 years. “

The total amount that the couple will win amounts to 3.6 million pounds over 3 years, which is 120,000 pounds a year.