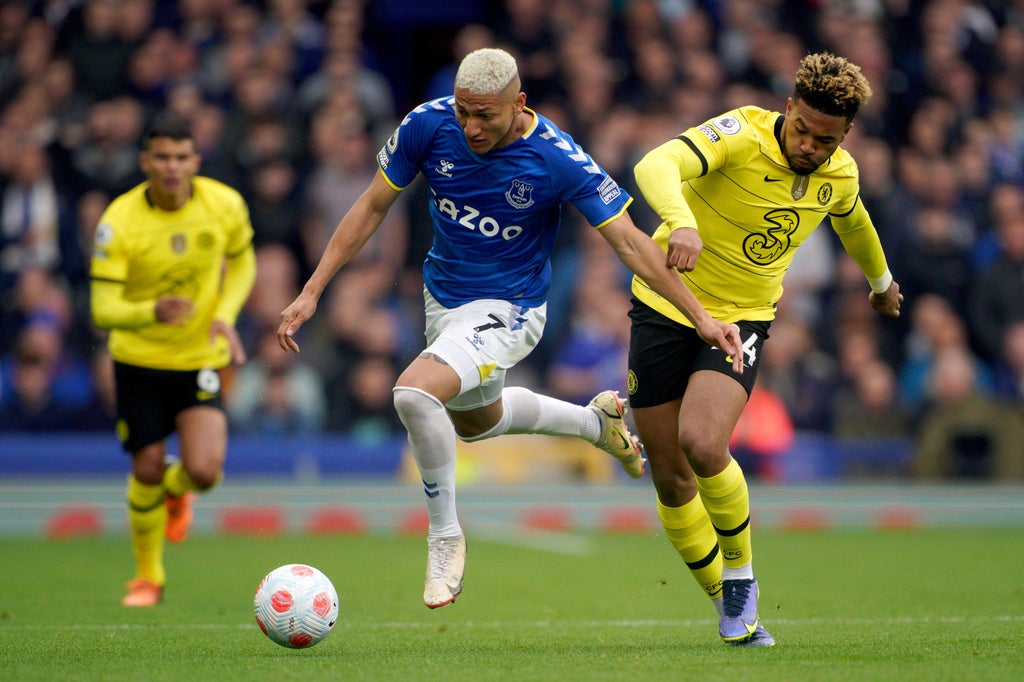 Times are getting tough for Frank Lampard and Everton, who have just six games left to save their Premier League status.

Burnley’s latest win yesterday has left the Toffees well off the pace in the battle to avoid the drop, although they do have two games in hand on Leeds above them.

The first of those arrives today with the visit of Chelsea, a side which has not lost an away game since January.

Thomas Tuchel is determined to right the wrongs of Thursday’s 1-1 draw with Manchester United after the Blues wasted a host of chances and surrendered their lead moments after finally breaking the deadlock.

Champions League football and a third-place finish are not yet secured for Chelsea despite their early crack at a title challenge, and there will be no sentiment about the Blues this afternoon as they take on club legend Lampard.

With a kick-off at 2pm BST, follow Standard Sport’s live blog for the latest updates with James Robson at the ground providing expert analysis.

Delph throws in a late challenge on Mount to earn himself a yellow card and the half ends just as it started, with a foul.

Goalless at the break.

45 mins: A Toffees attack subsides after a pair of long throws leads to Doucoure’s hit from range being blocked, and we have two minutes of added time.

43 mins: Great defending from Everton as Coleman bustles in to deny Werner after good work from Loftus-Cheek down the left before Alonso has a crack, which meets a sturdy block.

A rare moment for Chelsea to exploit some space and it ends with Jorginho pumping a cross into touch.

This has been a low quality half of football. Chelsea totally dominating possession, but haven’t produced any type of threat.

Everton have looked likelier to score, which saying something.

This is not just today, it is a feature for Tuchel. They simply must get more cohesion from his forwards if Chelsea are to have any hopes of challenging City and Liverpool next season.

It is all good and well having a secure defense, but it is multi-dimensional teams who win the title these days.

41 mins: Yet more stodginess as Havertz wants a foul and lands on the ball, which gives the free-kick the other way as he handles it in the process.

38 mins: A momentary VAR check after a cross into the Chelsea box hits an arm, which Everton’s claim was Rudiger’s. Replays show it was, in fact, Holgate, and we play on.

36 mins: Coleman and Azpilicueta having a duel of the veteran-right-back-captains by the touchline after Mount is booked for fouling Mina.

Kevin Friend has to get a grip here with further yellow cards handed out to both. That draws a cheer and a jeer from the home fans.

35 mins: This has turned into a proper scrappy affair with Everton fighting for every inch and Chelsea lacking the nous to open up tight spaces. The Toffees have enjoyed playing this role, which we saw in the Merseyside derby last week.

If only this fight had been present for a few months!

32 mins: Doucoure gets the better of Rudiger down the right channel and spins a cross into the box but Silva is in the right place at the right time to clear.

Everton come again nevertheless with Gordon firing wide of the near-post after taking aim from 20 yards. Mendy had that one covered.

29 mins: James beats a challenge inside the box and opts to clip a cross over a crowded six-yard area to Alonso at the back stick, yet he cannot replicate his strike on Thursday and the moment goes.

Everton win a free-kick up the pitch and Tuchel is furious.