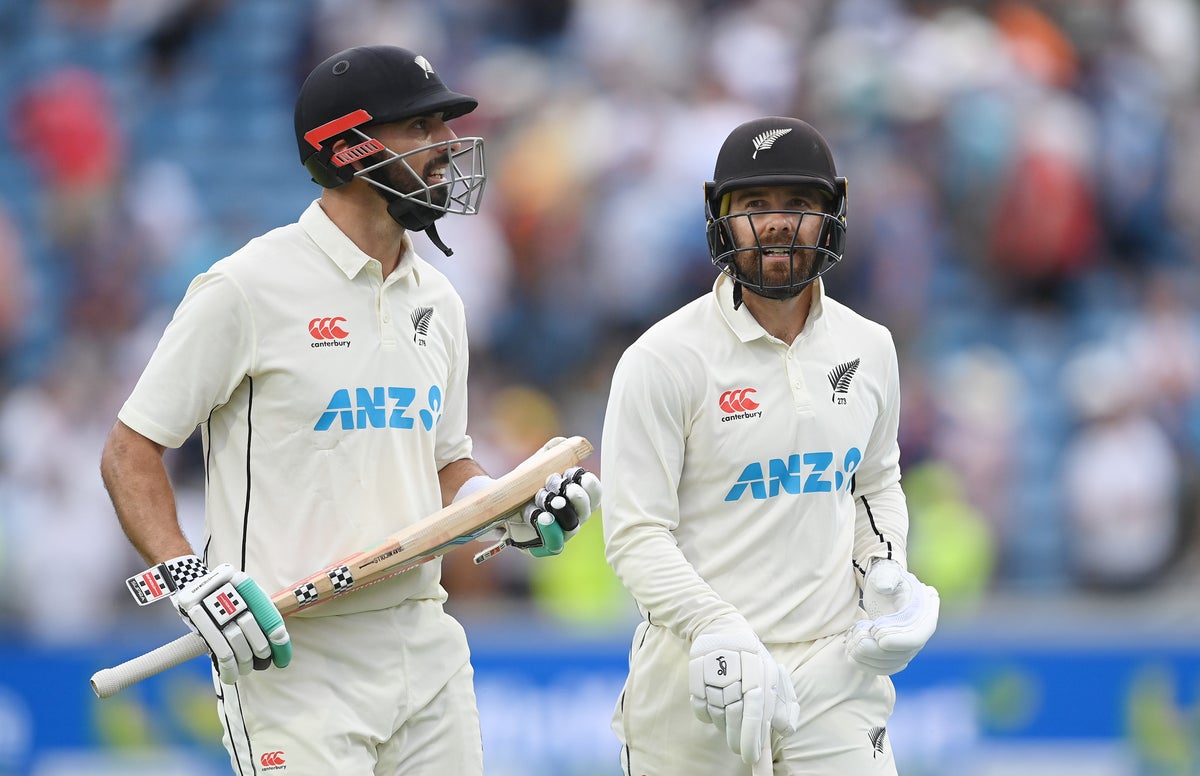 Hen England lost the toss on a straw-colored pitch, under cloudless skies, Stuart Broad, the leader of their attack, was heard groaning loudly as he ran off to get his bowling boots on. On every level, it looked like a batting day.

So for England to pick up five wickets – the last of them desperately lucky, it should be added – before running into their familiar foes Daryl Mitchell and Tom Blundell felt the decent first day’s work. New Zealand ended the day 225 for five and, despite the sixth wicket pair’s unbeaten 100, the game was no worse than in the balance for England.

England’s collective bowling effort, with James Anderson joining eight others on the guidelines, was excellent. Broad set the tone, with the vital wicket of Tom Latham in his first over the day, and Matt Potts’ first go with the new ball was a success, even if he didn’t take a wicket. Potts conceded just 28 runs from his 20 overs, and should have had Mitchell lbw at eight, but he could not persuade Ben Stokes to review.

England’s change bowlers kept the pressure up, with Jack Leach getting through a mammoth 28 overs, Jamie Overton taking a key wicket on debut, and Joe Root shuffling through a few, too. It was strange that Stokes did not bowl, having bowled at full pelt in his one day of training after illness on Wednesday.

Besides his reviewing – the failure to go after Mitchell, and two other lost ones – Stokes had a good day, though. Four of the five wickets came in the first over of spells, and he stuck to his policy of attacking at all opportunities with his fields.

After Broad picked up Latham, well taken at first slip, Kane Williamson – who was back from Covid and won that lovely toss – and Will Young settled. But Leach’s early introduction, after just 12 overs, brought immediate dividends. From round the wicket, Leach found a little drift and turn, and Young was pinned in front. His review was in just.

Ten overs later, Broad returned for his second spell and fiddled Williamson out at the end of a terrific over. Williamson had looked solid, taking Leach on, but Broad got one to just hold its line, and he played away from his body to be caught behind. That took Broad to 548 Test wickets, and within 15 of Glenn McGrath, No5 in the all-time list.

New Zealand took lunch at 65 for three, and England were well on top. Henry Nicholls, as he had at Trent Bridge, looked skittish and, at four, was extremely lucky to survive a review from Potts. The ball was crashing into the stumps, but it was unclear whether there was bat involved, so the onfield decision stood.

Nicholls stuck in, but his partner Devon Conway – playing with much more attacking intent – could not. Overton returned early in the afternoon and a touch of movement brought a drive, which an inside edge – Conway’s weakness – crashed into the stumps. Overton got better with each spell and touched 90mph in an encouraging debut that began with a cap presentation from his brother.

Mitchell was lucky in England did not review, but it was Nicholls leading a charmed life. His luck ran out, though, on the stroke of tea when they tried to smash Leach down to the ground, but picked out Mitchell’s bat at the non-striker’s end. He tried to get out of the way, but diverted it to mid-off, where Alex Lees took a simple catch. It was an extraordinary dismissal that saw both batters middle the ball.

As has been the pattern in this series, England got to Mitchell and Blundell, and then stalled. This was their third hundred partnership, and not even the new ball could dislodge them late in the day. They kept their concentration through a 25-minute rain delays, spells of bouncers from Overton, and plenty of bowling changes from Stokes. Just as they have all series.