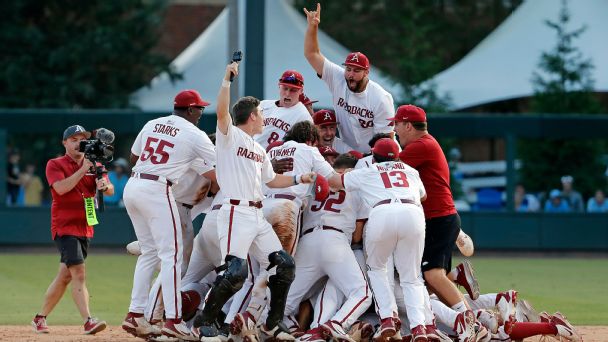 OMAHA, Neb. – One of the last people to leave the home clubhouse is the equipment manager, and the night of June 14, 2021 was a long one for Arkansas’ Mark Taylor.

The Razorbacks, the then-No. 1 team in college baseball, had just lost out on a trip to the Men’s College World Series after a ninth-inning home run by NC State in the super regionals. With their season ending earlier than planned, Arkansas’ players were hugging, crying and lingering for an hour and a half in the clubhouse.

Taylor, needless to say, held off on collecting uniforms.

More than 11,000 people had packed into Baum-Walker Stadium that day in Fayetteville, and some of them had camped out the night before to earn a spot in the left-field berm area called the Hog Pen. But the whole place fell silent as NC State recorded the final out. About the only words anyone remembers were what Arkansas skipper Dave Van Horn told his team after the game.

“We’re going to make up for what happened one day,” Van Horn told them, “and I hope it’s soon. We’re going to go to somebody’s field and we’re going to celebrate and dogpile on their field.”

One year later, the Razorbacks were celebrating in Chapel Hill after a super regional win over No. 10 North Carolina. On Saturday, they’ll play No. 2 Stanford in an opening-round game at the Men’s College World Series.

Though Van Horn believes that every Arkansas team is capable of making it to Omaha, the 2022 squad faced long odds. The Razorbacks lost nine players to the MLB draft, including the Golden Spikes Award winner Kevin Kopps, who has already advanced to Class AA in the San Diego Padres’ system. They took a nosedive in May, going 4-8 and failing to win a game in the SEC tournament in Hoover, Ala. They didn’t host a regional for the first time since 2015.

“They didn’t want to be known as the team after the team that didn’t do a whole lot and faded at the end of the year,” Van Horn said. “I don’t know. Just a lot of different personalities that came together. And when we got back from that trip from Alabama, we were gone for two weeks, a lot of times a coach can look at a team and look at the way they walk around, body language, you’re going ‘We’re in trouble.’ And we didn’t let that happen. They didn’t let it happen. And that me that makes them special. “

Arkansas was placed in the Stillwater regional, and won a 20-12 slugfest over Oklahoma State, then beat the Cowboys again in the regional final. The Razorbacks swept North Carolina in the super regionals to advance to Omaha for the third time in five years.

Shortstop Jalen Battles said the frustrations from 2021 forged a bond within the team and a stronger sense of confidence. They’d already been through their worst baseball experience.

After that loss, Battles packed up his room, went home to San Antonio and couldn’t even bring himself to watch baseball. He had contemplated leaving Arkansas after 2021 to start his professional career, and there was a running joke between him and Van Horn about how he’d consider staying if he could wear the No. 2 jersey. Battles, who grew up idolizing Derek Jeter, coveted the number, but it belongs to Van Horn, who wore it as a player for the Razorbacks and for the past 20 years as a coach.

In July, in the middle of the draft, Battles called Van Horn. He asked about the jersey number.

But it wasn’t about the number, Battles said.

“It was about being here today,” he said. “I mean, I’m just so grateful that I did come back.”

He is slashing .293 with an .850 OPS, 10 home runs and 44 RBIs. They got they feels loose and unencumbered by expectations or pressure.

A throng of children waited for Battles’ autograph after Friday’s practice at a high school in north-central Omaha. Battles came to the MCWS with his dad in 2019, before Arkansas. Fred Battles tweeted earlier this week that they sat in the bleachers that summer and talked about this dream of making it to college baseball’s biggest stage as a player.

Like many of his teammates, Battles is playing for his friends who couldn’t make it to Omaha. They text their 2021 teammates often. Senior pitcher Kole Ramage became Kopps is one of his best friends, and they talk all the time. After Sunday’s super regional win, Kopps sent Ramage a simple text: