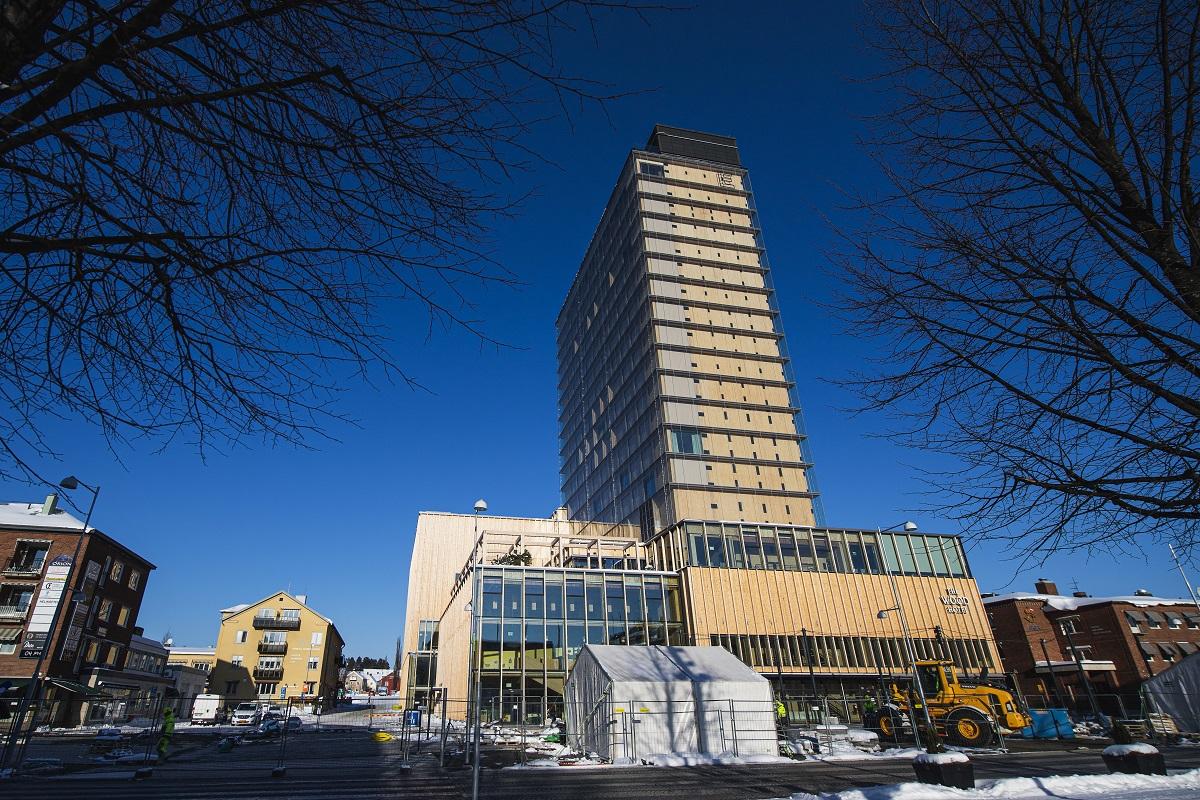 SKELLEFTEA, Sweden – A sandy-colored tower glints in the sunlight and dominates the skyline of the Swedish town of Skelleftea as Scandinavia harnesses its wood resources to lead a global trend towards erecting eco-friendly high-rises.

The Sara Cultural Center is one of the world’s tallest timber buildings, made primarily from spruce and towering 75 meters (246 feet) over rows of snow-dusted houses and the surrounding forest.

The 20-storey timber structure, which houses a hotel, a library, an exhibition hall and theater stages, opened at the end of 2021 in the northern town of 35,000 people.

Forests cover much of Sweden’s northern regions, now of its spruce, and building timber homes is a longstanding tradition.

Swedish architects now want to spearhead a revolution and steer the industry towards more sustainable construction methods as large wooden buildings sprout up in Sweden and neighboring Nordic nations thanks to advancing industry techniques.

“The pillars together with the beams, the interaction with the steel and wood, that is what carries the 20 storesys of the hotel,” Therese Kreisel, a Skelleftea urban planning official, tells AFP during a tour of the cultural center.

Even the lift shafts are made entirely of wood. “There is no plaster, no seal, no isolation on the wood,” she says, adding that this “is unique when it comes to a 20-storey building.”

The main advantage of working with wood is that it is more environmentally friendly, proponents say.

Cement — used to make concrete — and steel, two of the most common construction materials, are among the most polluting industries because they emit huge amounts of carbon dioxide, a major greenhouse gas.

But wood emits little CO2 during its production and retains the carbon absorbed by the tree even when it is cut and used in a building structure.

It is also lighter in weight, requiring less of a foundation.

According to the UN’s IPCC climate panel, wood as a construction material can be up to 30 times less carbon intensive than concrete, and hundreds or even thousands of times less than steel.

Global efforts to cut emissions have sparked an upswing in interest for timber structures, according to Jessica Becker, the coordinator of Trastad (City of Wood), an organization lobbying for more timber construction.

Skelleftea’s tower “showscases that it is possible to build this high and complex in timber,” says Robert Schmitz, one of the project’s two architects.

“When you have this as a backdrop for discussions, you can always say, ‘We did this, so how can you say it’s not possible?'”

Only an 85-meter tower recently erected in Brumunddal in neighboring Norway and an 84-meter structure in Vienna are taller than the Sara Cultural Center.

A building under construction in the US city of Milwaukee and due to be completed soon is expected to clinch the title of the world’s tallest, at a little more than 86 meters.

Building the cultural center in spruce was “much more challenging” but “has also opened doors to really think in new ways,” explains Schmitz’s co-architect Oskar Norelius.

For example, the hotel rooms were made as prefabricated modules that were then “stacked like Lego pieces on site,” he says.

Anders Berensson, another Stockholm architect whose material of choice is wood, says timber has many advantages.

“If you missed something in the cutting you just take the knife and the saw and sort of adjust it on site. So it’s both high tech and low tech at the same time,” he says.

In Stockholm, an apartment complex made of wood, called Cederhusen and featuring distinctive yellow and red cedar shingles on the facade, is in the final stages of completion.

It has already been named the Construction of the Year by the Swedish construction industry magazine Byggindustrin.

“I think we can see things shifting in just the last few years actually,” says Becker.

“We’re seeing a huge change right now, it’s kind of the tipping point. And I’m hoping that other countries are going to catch on, we see examples even in England and Canada and other parts of the world.” – AFP