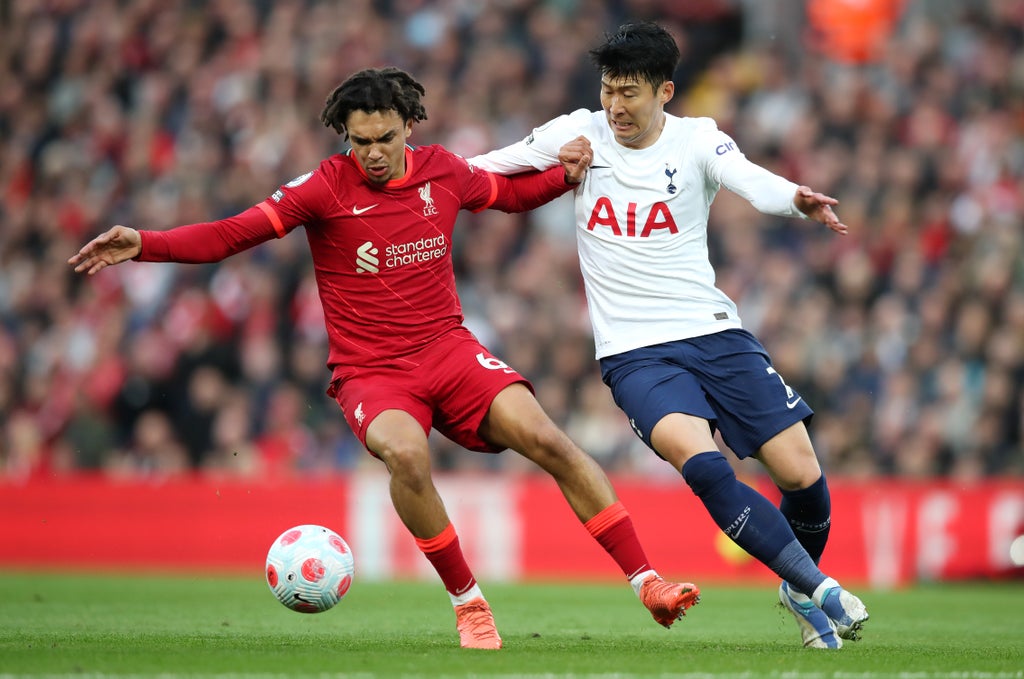 Liverpool host Tottenham tonight in a Premier League clash that will have ramifications in both the title and top-four races. The Reds are one point behind league leaders Manchester City with Spurs trailing fourth-place Arsenal by two.

Tottenham are potentially Liverpool’s toughest opponents in the remaining fixtures and earlier in the season the two sides played out a thrilling 2-2 draw in London. Jurgen Klopp knows his team cannot afford to drop points and need to keep winning to pile the pressure on City.

Victory this evening means the Reds will continue their drive towards an unprecedented quadruple. Liverpool have already lifted the Carabao Cup this season and have made it into the finals of the FA Cup and the Champions League after fighting off a Villarreal comeback to win 3-2 on Tuesday night and progress 5-2 on aggregate.

Meanwhile, Antonio Conte’s side can spoil the Reds’ quadruple chase as Spurs arrive at Anfield desperate for a victory to their own top-four bid. Three points would put them above the Gunners – who face Leeds tomorrow – and ensure they are within a touching distance of the top four ahead of the crucial north London derby on Thursday.

Follow the action and updates as Liverpool take on Tottenham at Anfield:

33 mins: Trent Alexander-Arnold floats a free kick into the box from the right wing. Pierre-Emile Hojbjerg heads it out to Thiago Alcantara who dinks it over to the right hand post. Luis Diaz peels away from Harry Kane and tries to knock the ball down for Sadio Mane but Hugo Lloris jumps onto it and safely smothers the ball.

30 mins: Chance! Liverpool float the ball into the box from the left side as Jordan Henderson attempts to get in behind Ryan Sessegnon. The defender gets his head to the ball first and knocks it back towards his own goal. Mo Salah is hovering in the six-yard box but Hugo Lloris leaps across and pushes it wide of the back post!

27 mins: Fabinho catches Harry Kane in the middle of the pitch after the Tottenham forward shifts the ball away from him. Spurs win a free kick but send it back to Hugo Lloris.

24 mins: Andy Robertson swings the ball into the box from the corner and picks out Virgil van Dijk. He gets a good chunk of the ball but can’t direct it on target and sends his effort wide of the far post.

21 mins: Jordan Henderson brings the ball into the left side of the box but gets forced wide by the defending duo of Cristian Romero and Emerson Royal. Henderson holds the ball up at the byline but Romero dives in and knocks the ball out for a corner. He clatters Henderson to the ground in the process and earns a grimace from Liverpool captain.

18 mins: Trent Alexander-Arnold whips it a pacey cross from the right wing and Liverpool have Sadio Mane and Luis Diaz waiting to receive it. Emerson Royal squeezes in between both players and leaps to win the ball in the air. He meets it with a good header and clears it out of the box for Spurs.

15 mins: Great defending! Pierre-Emile Hojbjerg comes over to the right side and receives the ball. He chips it into the box for Harry Kane who chests the ball down and looks to shoot only for Jordan Henderson to slide across him and take the ball out from under the striker’s feet.

12 mins: Another counter-attack comes from a Liverpool clearance. Henderson passes the ball up to Mane who threads it behind the Tottenham defense to play Salah free on the right. He carries the ball into the box, cuts inside onto his left foot and shoots but his effort is blocked and goes out for a corner.

9 mins: Nearly. The pace of this game is lightning in these early stages. Son Heung-min is played into the right side of the box and squares it into the middle. Alisson palms the ball away but it drops to Rodrigo Bentancur who shoots and sends the ball straight back to the goalkeeper.

Liverpool then fly up the pitch with Jordan Henderson driving the ball forward. He passes it to Luis Diaz who feeds it up to Sadio Mane. Mane sends it wide to Mo Salah but his pass into the penalty area doesn’t find a teammate.

6 mins: Mane has a first sight at goal with an effort from range that he puts straight down the throat of Hugo Lloris. Liverpool are quick to win the ball back and Trent Alexander-Arnold’s switch of play it headed clear by Emerson Royal.

Tottenham are shaping up with five at the back when they’re out of possession. It’s not going to be an easy night for Liverpool.