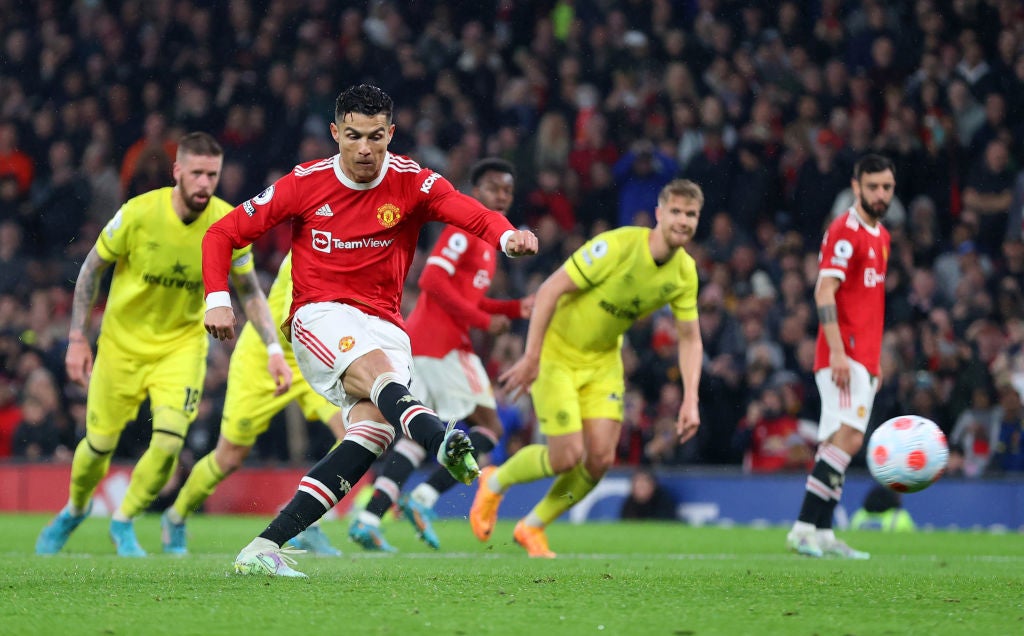 Rangnick denies accepting Austria job: ‘I will continue at United’

Follow live reaction as Manchester United wrapped up their home campaign with a comfortable victory and improved performance against Brentford in the Premier League at Old Trafford.

Bruno Fernandes opened the scoring inside 10 minutes as he finished Anthony Elanga’s cross from the right before Cristiano Ronaldo saw a second ruled out after Juan Mata was caught offside.

Ronaldo would not be denied a second time, however, as he won and then converted a second-half penalty to double United’s lead shortly after the hour with his 18th Premier League goal of the season.

Raphael Varane added a third late on as United cruised to victory and there were goodbyes for Mata and Nemanja Matic on what was their final appearances at Old Trafford.

The result moves United four points clear of West Ham in the fight for seventh place, although the Hammers have three games left to play compared to United’s two.

Follow all the action and updates as Manchester United face Brentford:

If it is goodbye and good riddance to 2021-22 at Old Trafford, it was a curiously fond farewell for Manchester United. A season that promised far more than it delivered, which began with a 5-1 demolition of Leeds, at least ended with Ralf Rangnick’s biggest victory in his final home game and was decorated by the departing Juan Mata.

Bruno Fernandes, who scored a hat-trick on that heady August afternoon against Leeds, booked the campaign at home with his 50th United goal. Cristiano Ronaldo smashed in a penalty and, at 37, has equated his tally of league goals – 18 – from 2008-09, when Real Madrid paid £ 80 million for him. Another exile from the Bernabeu, Raphael Varane, opened his United account and Brentford were comfortably beaten.

While it came to a backdrop of dissent, with supporters protesting about the Glazers’ ownership, United could at least enjoy victory, just their third in 12 games, in an open, entertaining affair. It was scarcely Rangnick football and it came with an air of irrelevance that underlined just how much their plans have gone awry.

In a week of Champions League semi-finals, United instead moved closer to booking a place in next season’s Europa League. They can still at least equal their lowest points total in three decades, the 64 they registered in 2013-14.

This has been their worst season since the 1980s and if the 5-0 evisceration by Liverpool represented a historic low, this represented their most emphatic triumph on home territory since Ronaldo’s second debut in September.

Cristiano Ronaldo has scored nine of Manchester United’s last 12 Premier League goals, with eight of those coming at Old Trafford.

Manchester United’s players make a lap of the pitch to applaud the fans who came out to see them every time they played at Old Trafford this season.

This was one of the United’s best performances of the year and they finished their games run of home games on a high.

90 + 2 mins: Ralf Rangnick’s final game at Old Trafford ends in a win. Cristiano Ronaldo was given the man of the match award and there was even time for a few farewells. Juan Mata and Nemanja Matic were both applauded when being subbed off and Edinson Cavani made his return to the team as well.

Man Utd run out 3-0 winners against a lacklustre Brentford team.

90 mins: Two minutes of added time to play at Old Trafford. It’s been a pretty regulation victory for Manchester United. Something that has been few and far between this season.

84 mins: Christian Eriksen laces a ball into the box trying to pick out Ivan Toney but the striker can’t get a touch of the ball to turn it towards goal.

81 mins: Bruno Fernandes has a go from range and his effort gets deflected wide of the left hand post. The corner is swung into the box and skips past Edinson Cavani and Phil Jones who where waiting in the six-yard area to get close to the ball. Brentford recovered the loose ball and clear their lines.

78 mins: There’s also been a few changes for Brentford. Christian Norgaard, Vitaly Janelt and Bryan Mbeumo having gone off with Mathias Jensen, Josh Dasilva and Roane Wissa brought on.

75 mins: Anthony Elanga and Juan Mata are taken off by Ralf Rangnick. Mata may also have played his last minutes here for Man Utd. He’s replaced with Phil Jones and Edinson Cavani comes on in place of Elanga.

72 mins: Manchester United are heading for victory in their last home match of the season. Raphael Varane meets a corner kick on the volley and turns it towards goal. There’s a deflection which confuses David Raya and inside the ball fly past him into the back of the net.