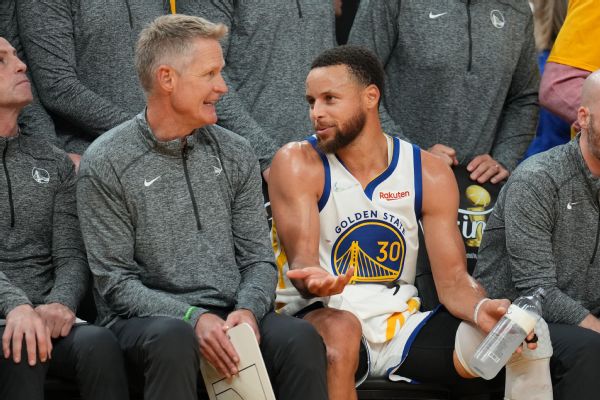 SAN FRANCISCO – One game after an epic 43-point and 10-rebound performance, Stephen Curry watched his all-time streak of 233 consecutive games with a made 3-pointer come to a stunning end in Game 5 of the NBA Finals on Monday night.

Curry went 0-for-9 from 3, but the Golden State Warriors picked up their star and secured a pivotal 104-94 win over the Boston Celtics at the Chase Center.

Curry, who finished the night with 16 points and eight assists, amassed his all-time streak of 233 games with a 3-pointer made over the regular season and playoffs. Now he returns to Boston for Thursday’s Game 6, looking to clinch another world championship and start a new 3-pointer streak.

Since 2013, Curry has had only nine games in which he failed to hit a 3-pointer. But his track record has been to bounce back big time from rare outings like these. The most prolific 3-point shooter in NBA history has averaged 4.4 3-pointers per game and 46% 3-point shooting in the next game after not making a 3, according to ESPN Stats & Information research. That includes a then-NBA-record 13 3-pointers in November 2016 against the New Orleans Pelicans.

“Keep shooting,” Curry said of his mentality when he comes off games like this one. “Very simple. Like there’s never – I’m not afraid to go 0-for-whatever because I’m going to keep shooting and taking shots that you normally feel like you can make. And I’ve responded well when I ‘ ve had games like that from the 3-point line.

“But I’ve never – I don’t think I’ve ever been happier after a 0-for-whatever type of night, just knowing the context of the game, the other ways you tried to impact the game and the fact that you had four guys step up in meaningful ways to help us win offensively. “

Curry will trade the streak for a win in the NBA Finals that puts the Warriors one victory from their fourth title in eight seasons.

He was thrilled to watch Andrew Wiggins produce a critical double-double for the second straight game, finishing with 26 points and 13 rebounds. And Klay Thompson picked up the 3-point shooting slack by making five and finishing with 21 points.

“We’re never stressed or worried about No. 30,” Thompson said. “He’s done so much and elevated this franchise to a place where it was hard to even imagine that he has a leeway, and he can have a bad night. I just know he’ll respond. He’s one of the greatest competitors I’ve had. ever been around.And he’s a perfectionist, like myself.I know he’ll be thinking about the shots he missed.And that’s a good thing, because Thursday, hopefully, now of the time, he regresses to the mean, and it’s scary when he does. “

“The man is a magician with the ball in his hands,” Thompson said. “He just redefined what the point guard position is capable of … he really is a transcendent talent that we’ll never see again.”

Even though Curry’s streak was snapped, he was still sending a message in his postgame news conference when he arrived to the podium in a T-shirt that read “Ayesha Curry CAN Cook.” That was in response to a Boston establishment that had written the message “AYESHA CURRY CAN’T COOK” on a board outside its doors.

“Of course it bothers me as a shooter,” Curry said. “You want to impact the game that way. But thankfully that’s not the only thing that you do out there on the court.

“Obviously, the track record says I shoot the ball better in the next game. Looking forward to that bounce-back.”