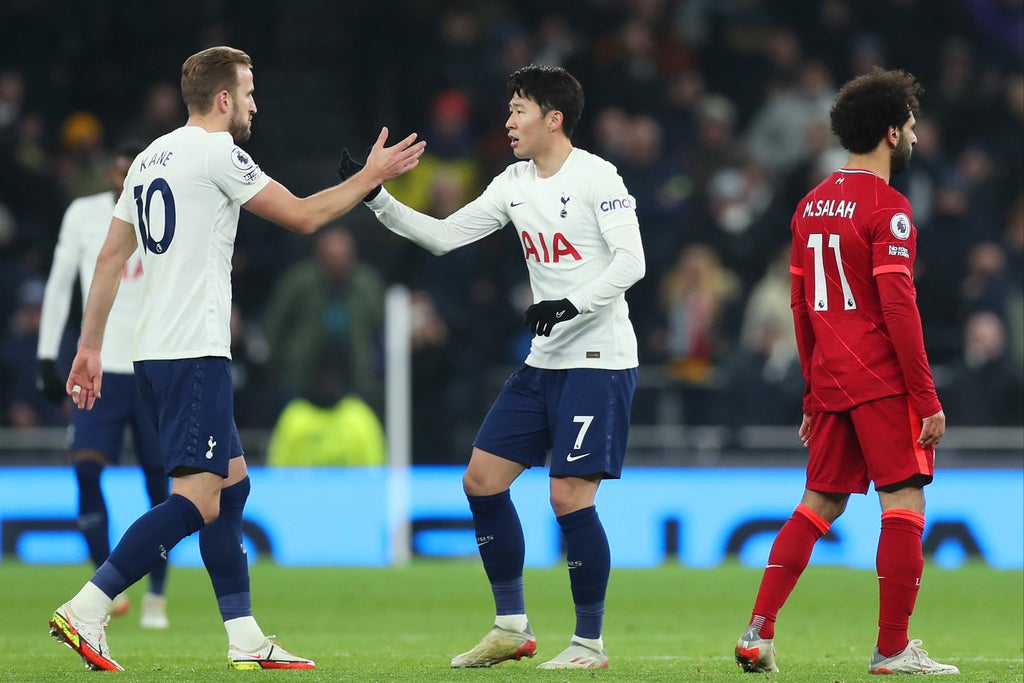 here is no more daunting challenge on paper than facing quadruple-chasing Liverpool at Anfield but Antonio Conte knows that, in reality, they may not be the worst opponents for Tottenham on Saturday night.

Jurgen Klopp’s Reds are only the third Premier League team ever to play in every possible game across a season and their relentless pursuit of Manchester City has been notable for its lack of jeopardy. Every match in their run-in should be a knife-edge affair but Liverpool are so accomplished, they have scarcely been made to feel uncomfortable.

Nonetheless, Conte legitimately reasons that Liverpool’s style and the circumstances of tomorrow’s fixture should lead to opportunities for his side at Anfield.

If the last month has proven anything, it is that Conte’s Spurs are best against opponents who leave gaps for them to attack, as Liverpool will surely do.

Klopp is not going to alter his aggressive defensive line for anyone, even Harry Kane and Heung-min Son, who have broken records on the back of their ability to find each other in space and finish.

Stopping the Reds from scoring is another thing altogether, but Spurs should get more sights of goal at Anfield than against Brighton and Brentford – opponents who were content to sit back, squeeze the space and let them have the ball. Spurs failed to have a shot on target in either of last month’s games.

“When we play a team that likes to play face to face, for the characteristics of my players and my team, maybe it’s better than when we find a team who defends very, very deep with not so much space for us to exploit,” Conte said yesterday.

Conte knows Liverpool will give up chances and it was notable that they brought up their “weaknesses” twice yesterday, while grinning when asked if he would instruct his players to go direct to bypass the Reds’ press.

Liverpool’s need to win at all costs to maintain the pressure on City could also work in Spurs’ favorite. If Conte’s side can stay level going into the final 20 to 30 minutes, the hosts will need to take more risks, which should create more space for the visitors on the counter-attack.

The conditions of Spurs’ entertaining 2-2 home draw with Liverpool in December were warped because both teams were missing key players through Covid but the game still demonstrated that Conte and Klopp know how to set up sides to create chances against the other.

Dele Alli found space behind Liverpool with particular ease and there could be similar joy for Son this weekend, with the South Korean chasing Mohamed Salah in the race for the Golden Boot.

That said, neither Fabinho nor Virgil van Dijk played in north London and they make Liverpool a completely different prospect, especially if the former can keep Kane off the ball and the latter stops Son getting away shots. Brighton and Brentford demonstrated that to stop Spurs, you only have to stop their front three.

For Spurs, getting a result will require a feat of mentality, as well as tactics. Even if Conte’s plan is faultless, his players are only human and will be haunted by a string of missed opportunities in this fixture.

Spurs have not won at Anfield since 2011, and Mauricio Pochettino and Jose Mourinho both presided over solid tactical displays, undone by wayward finishing.

In 2017-18, Kane missed a late penalty in a 2-2 draw and, in the following season, Moussa Sissoko fired over a glorious opportunity before Toby Alderweireld turned into his own net in the first of three consecutive 2-1 defeats.

With Spurs leading 1-0 in 2019-20, Son smacked the crossbar with the goal gaping and, last season, Steven Bergwijn missed two gilt-edged chances to win the game, only for Roberto Firmino to head home the winner in stoppage-time .

The recent history of the fixture is a tale of squandered chances for Spurs – but chances nonetheless. If there are to take anything from Merseyside at this time, they must be clinical, while relying on a mixture of luck and judgment to keep Liverpool’s front three at bay.

For Spurs, the match feels like both a free-hit and a high-pressure occasion, which could prove an acid test of Conte’s attempts to change their mentality.

The head coach knows Liverpool, for all their brilliance, are not infallible and it will be up to his players to prove it by being ruthless when the chances inevitably come.