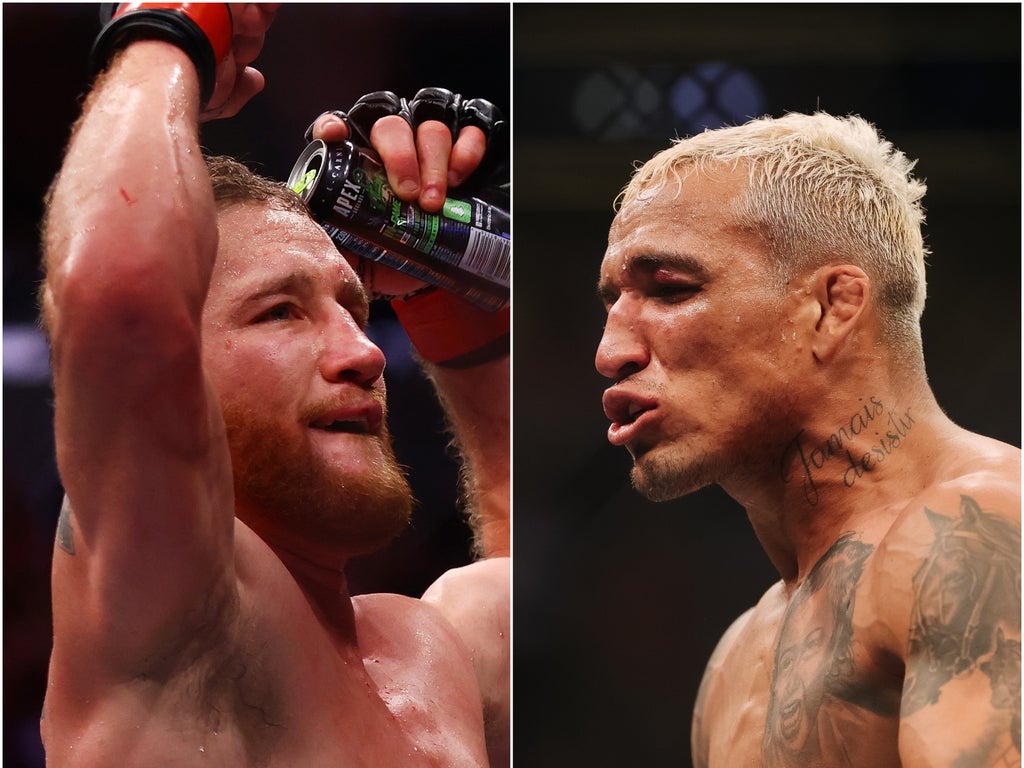 This week, Joe Lauzon produced perhaps the most succinct and fitting description of fellow UFC lightweight Justin Gaethje that has ever been uttered.

“He’s a guy who will light himself on fire just to burn you a little bit.”

Gaethje has been in enough firefights that we must have passed the point of labeling it a tendency, or proclivity; it is a specialty.

Still, it’s hard not to feel as though the fire with which the American is playing this week might just scorch him – potentially for good.

“Once a coward, always a coward.”

Those were Gaethje’s words this week as he offered his honest thoughts on UFC lightweight champion Charles Oliveira, his opponent in the UFC 274 main event on Saturday.

Gaethje (23-3) was quick to backtrack; “I’m not calling him a coward, but you can’t just take that away.”

Similarly, however, Gaethje can’t just take those words away. This time, they might have set themselves on fire before even setting foot in the Octagon.

The former interim champion has been quick to emphasize what he sees as Oliveira’s old tendency – proclivity, specialty – for “quitting” in fights. The 33-year-old is not the only one in the sport to have made the observation over the years.

What Oliveira’s last two fights have proven, though, is that such observations are severely outdated by this point. With seconds remaining in the first round of the Brazilian’s clash with Michael Chandler last May, Oliveira (32-8) looked to be beaten. Having been dropped to all fours, “Do Bronx” did his best to avoid Chandler’s punches – any one that could have ended the fight and secured the American the vacant lightweight title. Oliveira did enough to reach the buzzer.

Within seconds of Round 2 having begun, the Brazilian had dropped Chandler with the most precise of left hooks. The jiu-jitsu black belt, who holds the records for most finishes and most submission wins in UFC history, highlighted the progression of his striking to put Chandler away in clinical fashion – but only after having survived severe adversity.

Oliveira had the chance to “quit”. He rejected it. Seven months later, as he put the belt on the line against favorite Dustin Poirier – whom many saw as champion in waiting – Oliveira was again presented with the choice to quit as he was knocked down twice in the first round. The 32-year-old again persevered, however, and went on to dominate Poirier in Round 2 before submitting him in the third frame.

The manner in which Oliveira secured the rear naked choke was not dissimilar from the way in which Khabib Nurmagomedov – the Brazilian’s predecessor as champion – sealed the same submission against Gaethje in 2020. The work on display was masterful in each case. Against Nurmagomedov, Gaethje tapped. The referee missed it, and the American went out, but the simple fact is: Gaethje quit.

To be clear, there is no shame in a fighter tapping out – to suggest so would in fact be shameful – but it is fair to note that fighters utilely twisted logic to preserve their own self-confidence, maybe their egos. In Conor McGregor’s mind, they’ve lost just one fight despite the six defeats on his record. In McGregor’s words, decisions and submissions don’t count – only knockouts.

Gaethje has not descended to that plain of delusion as he prepares to challenge Oliveira on Saturday, but there is distinct irony in his suggestion that the champion is a quitter for not having rallied on certain occasions in the past when he has been subjected to significant pressure , when Gaethje himself has submitted. Add to that the fact that Oliveira became a world champion despite being told as a child that he might never walk again amid a period of intense illness.

“The choice to quit is something one makes,” Gaethje said this week. “And once you make it, you can make it again, because you know it’s there. I don’t believe I’ve ever made that choice. Some people haven’t and I believe some people have … I believe that he has, and that’s all I was saying.

“I believe deep down, he knows his way out – and that’s to quit whenever he gets hit too many times too hard. Deep down, once it happened once, it will happen again. And I’m the perfect guy to show it to him, and I’ll show it to him on May 7. ”

Gaethje has acknowledged the necessity of avoiding grappling exchanges with Oliveira this weekend. Although the challenger’s wrestling skills are noteworthy – and were honed in part in Arizona, where UFC 274 takes place – even he knows the dangers of tangling with the serpent-like Oliveira in a grappling capacity.

What Gaethje needs is a firefight, the opportunity to capitalize on his brutal punching power. He said this week: “I’m going to put a hole right in his face and it’s going to be glorious.”

But even then, if he expects Oliveira to “quit,” he will likely be in for a rude awakening.

It might even be one facilitated by the referee as Oliveira’s hand is raised.