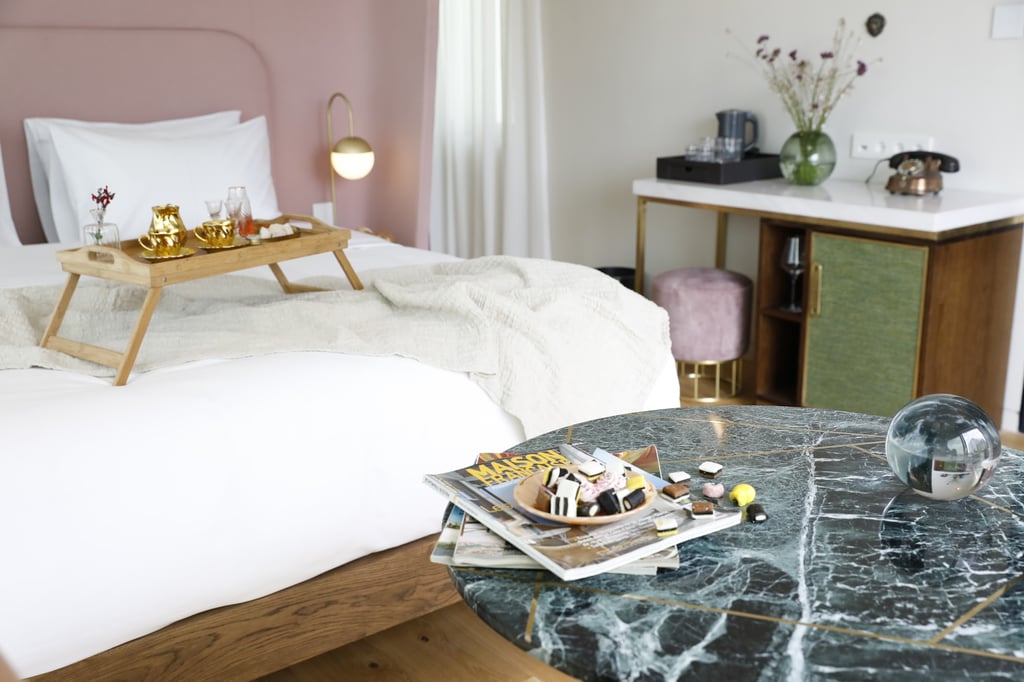 The bronze lion’s eyes follow me around my bedroom. What is it trying to tell me? I lean in for a closer look and, as I do, I see a button – like a doorbell, right there in the lion’s mouth. Is this a trap? Is something going to leap out the closet if I press it?

For a rare moment, I experience total silence in Athens’ now swinging five-star hotel. But then, moments later, there’s a knock at the door.

I open it to find an impeccably-dressed porter holding a card, and something tied up in a red ribbon. She winks as she hands them to me, then disappears down the marble-floored hallway as mysteriously as she arrived. I unwrap the ribbon to reveal the luxurious bath robe. The card congratulates me for daring to push the button. Just where is Earth am I?

I am at the Gatsby hotel, an audacious new property evoking the hedonistic spirit that defined 1920s America. So then, what is it doing here, in the heart of Athens, the literal and metaphorical other side of the world to F. Scott Fitzgerald’s West Egg?

It is, I discover, right at home.

Yes, Athens is bathed in history – you know that already – but it’s also a living, breathing city. Modern Athenians have not forgotten their roots, but neither do they rest on the laurels of their ancestors’ achievements.

In the shadow of the Acropolis, their shops, bars and restaurants are forging a new name for the city. Forget what you’ve heard about the Grand Tour – the Athens of today is more concerned with indie culture.

Set in an original 1930s building, previously a jeweller’s, then the headquarters for the secret police, the Gatsby retains much of the mystery of its previous inhabitants left behind, updated with art-deco flourishes.

It’s what Athens has needed for many years now: a stylish, provocative centrepiece from which travelers can discover the alternative side to this thriving metropolis.

And why not? Self-expression is the name of the game in modern Athens. I discovered this on my first night in the city while partaking in a tour with Alternative Athens (alternativeathens.com; tours from € 49 / £ 41). Led by graffiti artist Nikos, I get to see the parts of town tour books have forever stuck their noses up at.

Starting in the thriving working-class district of Gazi, Nikos introduces me to the city’s most prized street art, which features world-famous stars such as INO and 1UP.

Next, we stop in Kerameikos to admire the striking modernist architecture. And finally, we head for a drink at Kalimeres in the up-and-coming neighborhood of Psiri (kalimeres.gr; cocktails from € 9 / £ 7.50), where Nikos explains his vision.

“We want to show off the undiscovered side of tourism in Greece,” he says. “To encourage people to look beyond the Acropolis and discover Greek history and culture through the medium of urban exploration.”

“That’s all well and good, Nikos,” I argue, “but you surely can’t expect me to come all the way to Athens and not visit the Acropolis?”

“Oh, don’t you worry about that,” he smiles. “We’ll show you the Acropolis, the Alternative Athens way.”

On my way back to the hotel, I detour via Noel Bar (noelbar.gr; cocktails € 12 / £ 10), a Burlesque-y late-night spot with a subversive Catholic art theme, where people literally dance out of the doorway.

After sampling a few of their sublime Our Lady cocktails, I’m up and dancing too. The music choices are as eclectic as the décor, which – like the Gatsby – seem to echo Athens’ widespread obsession with art deco.

The next morning, after some squelchy-soft avocados from Gatsby’s breakfast menu, curated by chef Panagiotis Flakas, I’m greeted by Nikos’ colleague Vassia. She is here to make good on Nikos’ promise by taking me on a tour of the Acropolis.

Vassia yanks me up the steep slopes of the Acropolis (tickets € 20 / £ 17 per person), all the while regaling me with tales of the Greek pantheon and their many hijinks. The ruins of the Acropolis take on an entirely different meaning as I start to picture the mighty Zeus roaming around, stitching the unborn fetus of Dionysus into his thigh. As it was then, so it is now: things tend to get pretty wild in Athens.

Mythology and sightseeing are the pillars of the Greek travel experience, but there is one more aspect of my trip begging to be explored: the food. Thus, I shoot for the heart of the Monastiraki neighborhood, Athens’ hustly-bustly urban core and an area fast becoming known for its street food offerings.

Right now, Hasapika (mains from € 9 / £ 7.50) is the place every Athenian is talking about. Founded by compatriots Spiros, Marios and John, this novel enterprise has revolutionized Dimotiki Agora, the central market of Athens.

Their offer is simple: “We’re not a restaurant, we’re a food experience,” Spiros explains. “We find the best cooks in the market, they cook their own food, we curate the dishes and serve it as one meal.”

I get to try oysters, Greek feta salad, crayfish ravioli, mussels in mustard sauce and a whole platter of fresh sushi, all in one sitting – washed down, of course, with a couple of swigs of the team’s favorite ouzo.

That should be enough food for a lifetime, but I’m still not done. And so it’s time to go deeper into Monastiraki, to Birdman (birdman.gr; mains from € 8.50 / £ 7), which styles itself after a Japanese cat bar, with music belting out from a classic HiFi and a wide selection of sake to sup on.

The food is almost too good for words. I warm up with sumptuous cuts of ichibo nigiri, then follow up with the Smash burger – smash by name, smashing by nature. This is casual dining elevated to Herculean standards.

On my way home, there’s just enough time for a last drink at Athens’ very own Speakeasy bar (opens at 9pm; cocktails from € 11 / £ 9). Promise to keep this secret? Look for the unremarkable door two numbers up from the Gatsby. Ring the bell, then smile to the camera. The door swings open, leading you down a secret staircase behind a cafe into a dingy basement, where you’ll discover cocktails that’ll make you wish you’d lived through the Roaring Twenties.

Back in my room, I don my new bath robe, put on some chilled music and run the hot water in my free-standing bath.

There, I reflect on Athens, a city that’s as glorious and gritty as Barcelona or Berlin. From secret speakers to street food and subversive graffiti, there’s a world beyond the blasé by-the-book tourism to discover. The Gatsby is a portal into this exciting urban underbelly – that is, if you dare to press the button.